“St. Katharine Drexel’s joyful spirit invites us to a deeper appreciation of Christ’s
love for us and our need to respond as one of His disciples, fostering
a welcoming, caring and faithful Catholic community.”

In the late October of 2008 Bishop Thomas G. Doran established the parish of St. Katharine Drexel in Sugar Grove, Illinois. The new parish was founded thanks to a major gift from Anthony, Jerry and Keith Rich, local Sugar Grove businessmen. In early November Bishop Doran named Rev. Robert Jones pastor of the first new parish formed in the Rockford Diocese since 1989.

Dr. Mike Cieslak, Director of Research and Planning for the Rockford Diocese, presented data that showed the growth of Sugar Grove over the past 30 years and provided projections of a future population explosion reaching 60,000 people. The data confirmed the real need for the establishment of the parish.

Once Rev. Jones assumed his pastorate, getting a feel for the community of St. Katharine Drexel became a priority. A survey, part of the planning study, was used to assess the views of St. Katharine Drexel parishioners. Parish members were solicited to give feedback regarding building priorities as well as their views regarding the impact church has on parishioners’ lives, the neighborhood and the Sugar Grove community at large. Another important component of the survey was to assess the willingness of the parish to provide spiritual, emotional and financial support as the future vision and direction of the parish evolved.

Since the establishment of St. Katharine Drexel Parish it has become home to over 1000 registered families, registration in the Religious Education program exceeds 300 students pre-school through high school and attendance at weekend Masses regularly exceeds 1000 worshipers.

In June, 2021 parishioners of St. Katharine Drexel Parish were happy to welcome Rev. Stephen St. Jules as the second pastor of the parish.

The spirit of the people of the parish mimics that of its patroness, St Katharine Drexel. The warm welcoming environment is evident to all. 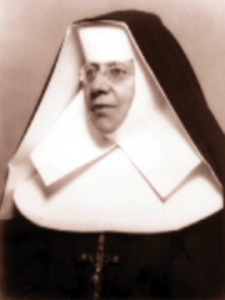 St. Katharine Drexel was born in Philadelphia on November 26, 1858. She was the second daughter of Philadelphia banker and philanthropist Francis Anthony Drexel and his first wife, Hannah Langstroth. Francis and Hannah had one other daughter, Elizabeth, who was the eldest of the two daughters. Hannah died when Katharine was only five weeks old. Francis was deeply saddened by the loss of Hannah and for the following two years after her death, Elizabeth and Katharine lived with their aunt and uncle. Francis Drexel later married Emma Bouvier, and Elizabeth and Katharine joined them as a family. To this marriage between Francis and Emma, a third daughter, Louise, was born in 1863. The children grew up in a very loving family atmosphere permeated by a very deep faith. By word and example, Francis and Emma taught their daughters that the wealth that God had entrusted to them was meant to be shared with those in need. Three afternoons a week Emma opened the doors of their home to serve the needs of the poor. When the girls were old enough, they assisted their mother in this ministry.

As a young woman, Katharine visited the Southwest with her family. On these trips, she witnessed destitution, poverty and a lack of education among the American Indians. This experience inspired her to help alleviate their condition, and in 1887 she established her first school, St. Catherine Indian School in Santa Fe, New Mexico.

In 1887 Katharine and her two sisters travelled to Rome, and had the opportunity to have a private audience with Pope Leo XIII. Kneeling at his feet, Katharine asked for missionary priests to be sent to assist the American Indians. The Pope responded: “Why not, my child, yourself become a missionary?” Katharine had pondered the possibility of becoming a contemplative religious, devoting her life to prayer and giving her wealth to the support of the missions. This suggestion made by Pope Leo XXIII was at first disturbing to Katharine as this was not the contemplative life to which she felt inclined.

After prayer and discernment, and consultation with her spiritual adviser, Katharine Drexel entered the novitiate of the Sisters of Mercy, in Pittsburg, PA where she received her religious formation. Then on February 12, 1891, in an arrangement with Philadelphia Archbishop James O’Connor, Katharine Drexel established a new religious order, the Sisters of the Blessed Sacrament for Indians and Colored People to address social injustice, provide quality education, and spread the Gospel to the American Indians and Blacks. From the age of 33 until her death at the age of 96, St. Katharine Drexel gave a “Total Gift of Self” to her ministry. She distributed her inheritance of more than $20 million to meet the needs of the Native and African Americans and was a vocal advocate for racial tolerance.

In 1935, St. Katharine Drexel suffered a severe heart attack, and for the next twenty years she lived a contemplative life in retirement. She died on March 3, 1955, at the age of 96 at St. Elizabeth Convent in Bensalem, Pennsylvania. At the time of her death, there were more than 500 Sisters of the Blessed Sacrament teaching in 63 schools throughout the United States. At that time it was the largest active religious congregation in the United States.

Katharine Drexel was beatified on November 20, 1988. She was canonized by Blessed Pope John Paul II on October 1, 2000 and became the second recognized American-born saint.

The Vatican identified in St. Katharine a four-fold legacy:

St. Katharine Drexel is known as the Patron Saint of Social Justice, as well as Philanthropists. Her feast day is celebrated on March 3rd, the anniversary of her death.

On August 2, 2018, St. Katharine Drexel’s sacred remains were transferred from the Sisters of the Blessed Sacrament Motherhouse in Bensalem, Pennsylvania, to the Cathedral Basilica of Saints Peter and Paul in Philadelphia. The newly constructed tomb, located near the Drexel Family altar, is open for visitation and prayer. More information on the St. Katharine Drexel Shrine can be found at: https://www.saintkatharinedrexelshrine.com/